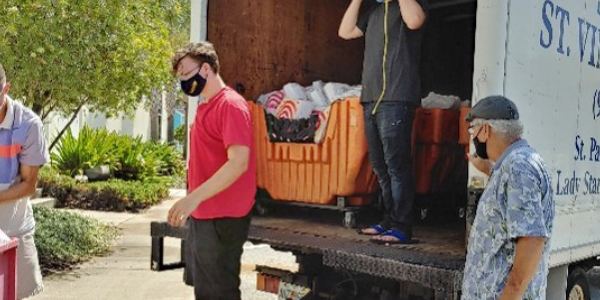 In 1944, Edward I Devlin donated 200 shares of common stock in the Manati Sugar Company to the Diocese of St. Augustine. This gift, valued at $10,000, was given for the benefit of the St. Vincent de Paul Society of St. Augustine. It was Mr. Devlin's desire the funds be used "for the amelioration of suffering and relief of the poor and distressed." That was a lot of money in the middle of World War II. In the past 75 years, the endowment has grown and become an important source of annual support for the work of the St. Augustine conference.

Before there were endowment funds, the first conference of the St. Vincent de Paul Society in the diocese, organized in 1914 at Immaculate Conception Parish, sold subscriptions to Our Sunday Visitor magazines, which brought in between $1,500 and $2,500 a year. Today's 380 members no longer sell magazine subscriptions. Their work is supported through donations, fundraisers, the revenue from six thrift shops and the endowment at the Catholic Foundation. Today, the Catholic Foundation holds four restricted funds which benefit St. Vincent de Paul societies in the diocese – Jacksonville, St. Augustine, Christ the King Catholic Church and the Beaches Conference.

An anonymous gift of $100,000 recently established the St. Vincent de Paul Society Beaches Conference Fund in the Catholic Foundation's endowment. As a result of this donor's selfless generosity, the Beaches Conference will receive yearly disbursements in perpetuity, beginning next year. "I'm proud that someone thought so well of our conference that they would give us that much money. They wanted to make sure we continue. It says a lot for the volunteers," said Candyce Breidert, president of the Beaches Conference. The conference has about 40 volunteers with a core of 20 regularly active volunteers. "Normally we help about 25 families a month but between March and May this year we helped 168," Breidert said.

Though much has changed since the gift of stock was received in 1944, there is still great need all around our diocese. "It doesn't matter where you live in the diocese, whether it's Ponte Vedra or rural counties, there are always people in need. Now more than ever," said Denise Bunnewith, president of the diocesan St. Vincent de Paul Council. The coronavirus pandemic has added to the number of people who are in need. "We're seeing people with nice houses and cars asking for assistance because they're out of work," she said.

The Society has 19 conferences in the diocese which helped more than 50,000 people with such things as emergency rent and utilities, transportation, food, and furniture. Bunnewith said working with those in need also provides an opportunity for evangelization. "We pray with them. Sometimes they need encouragement," she said. "We try to see the face of Christ in them, and we hope they see the face of Christ in us."