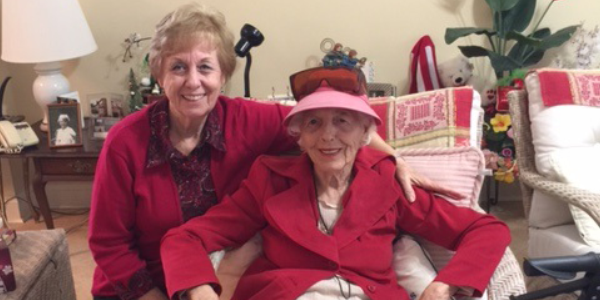 The Mullens, who were parishioners at St. Michael's Catholic Church in Fernandina Beach, left a charitable remainder trust to benefit Catholic education in Nassau County. The trust is now part of the endowment of the Catholic Foundation. Jon Hay, the Mullens' estate attorney, helped them set up the trust during their estate planning in 1997.

The Mullens were originally from England and settled in Atlanta, where Jim had a successful packaging business and Betty was a nurse. They retired on Amelia Island, where Jim stayed busy in his woodworking shop and tinkering with a sailboat docked behind the house, Hay shared.

Their property in Atlanta was used to set up the trust, funded by rental income that provided them valuable income for 20 years.

James died in 2004. Betty continued to live on her own, even as macular degeneration took her eyesight. "Whenever we'd check on her she'd say, 'I'm always on duty,'" Hay said. "She loved music, upbeat music she had probably danced to when she was younger."

Her final years were spent in an assisted living facility. She passed in 2016.

When the trust expired in 2017, the remainder went to a permanent endowment to benefit Catholic education in Nassau County.

"She told me any number of times how important education was and how she wanted to do something for local young people," Hay said. "I think she was helping the children she never had."

Deacon Scott Conway, superintendent of Catholic Schools, said, "The Mullens' generous support of the vision of Catholic Education in Nassau County will have an impact that would never have been imagined by the Mullens when they initiated this fund.

The James & Elizabeth Mullen Nassau County Catholic Education Fund has already assisted Catholic education in Nassau County by providing the seed money to begin a new Early Learning Center. We are expecting to build an elementary and high school in the Nassau County area in the next 15 years. We are so thankful for the generosity of the Mullens."

Hay said people often don't think they have enough money to be philanthropists.

"I tell them that the definition of 'rich' is someone who has more money than you do. And you have more money than someone, too. It's all relative. I suggest that they think about doing well by doing good."

The Mullens received a substantial tax deduction when the trust was established and paid tax only on the annual distributions they received over time. And the money in the endowment is tax-free for the charity it benefits.