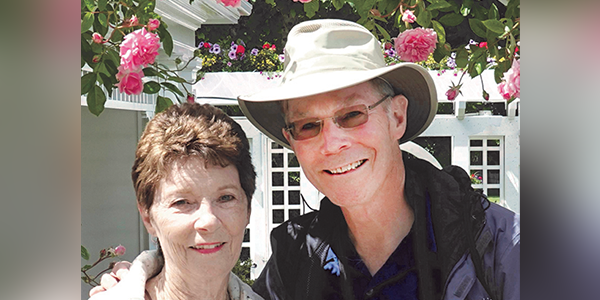 Pam and George Dewey care deeply about our Church in North Florida. Active parishioners in the diocese of St. Augustine, they have built relationships and formed lasting ties throughout our faith community by volunteering and donating to parishes and ministries over the years.

To ensure the future of their beloved Church, they have also recently become "investors" in the Diocese of St. Augustine. Their investment will provide valuable support for several vital programs when they are no longer able to do so in person. The plans that they have made today are the foundation for future support for the people and ministries that are closest to their hearts.

"We've started an endowment for our parish, St. John Paul II Mission. This enables us and others to contribute now to grow future funding. The parish can also invest in the fund, ensuring its future growth. We've also made a plan to contribute to the endowment account for the Office of Human Life and Dignity. The actual money is coming from our IRA."

There are many ways to contribute to an endowment fund, either during life or through your estate plan, after you're deceased.

The Deweys were updating their wills, making provisions for their two children and their favorite charities, when Pam read about a couple who had used their Individual Retirement Account (IRA) to make a contribution to the Catholic Foundation as part of their estate planning.

"When someone with an IRA turns 70½, they're required to start withdrawing money," George said. "And, income from an IRA can be taxable. You can now transfer part or all of that income as a qualified charitable distribution (QCD). By giving to the Foundation, the proceeds aren't taxable," he shares.

If George sounds like he knows what he's talking about, he does. He was an attorney in the estate and gift tax division for the Internal Revenue Service. Pam worked there also, in IT (Information Technology). They are both now retired.

"I was reviewing wills and trusts and more aware of these issues than many folks," George said.

They are especially proud of the endowment they started for their parish community. St. John Paul II Mission, one of the newest parishes in the diocese, was founded in 2012 in the community of Nocatee in St. Johns County. It began as a mission of Our Lady Star of the Sea Parish in Ponte Vedra Beach with 136 families and quickly doubled in size. A parish center was built in 2015 on 35 acres of land donated to the diocese by the Davis family.

"It's such a young parish," Pam said. "We were surprised by how many parishes and ministries have Foundation accounts. It's a long list, and it's growing. And now, St. John Paul II does, too, and anyone can make contributions to it."

The Deweys decided to contribute to the new endowment fund for their Parish and the diocesan offices of Vocations and Human Life and Dignity as part of their estate plan. "We have so many seminarians, and this will help them as well as the future of our Church," Pam said.

They also are contributing to the Office of Human Life and Dignity, where Pam is a longtime volunteer. She is the South Jacksonville Deanery Respect Life Chair, serving as an intermediary between parishes and the diocesan office. The diocese recently hosted the 2019 Florida Respect Life conference at St. Anastasia Catholic Church in St. Augustine.

"One thing we like about utilizing the Foundation as a charitable vehicle is that we can choose what ministries and what percentages we give," Pam said. "It's very easily changed if needed."

George encourages people of any age to consider a gift to the Catholic Foundation. "Anyone making a gift — now or later — have several roads to take, but they should be aware of the tax law regarding gifts from IRAs," George said. "It's an investment in the diocese. This is a way of paying back."