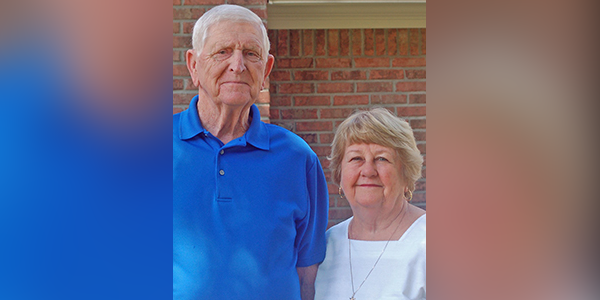 Bill and Louise Peaks have been generously supporting their parish and the Diocese of St. Augustine for many years-and that is not going to change. But what they have changed is how they fund their support: They are saving a bundle in taxes by using what is commonly known as the IRA charitable rollover.

"It was so easy to set up; I'm just sorry we didn't start it sooner!" says Louise, who has been a member of the St. Paul's Jacksonville Beach parish for more than 40 years.

With the charitable rollover, IRA funds go directly from your IRA administrator to the charities you select. The benefit to you is that your gift is not counted as taxable income, thus reducing your income tax. That is especially helpful when you don't really need the income from the required minimum distribution (RMD) that the government insists you receive after the age of 70½.

The Peakses' RMD gift is divided among the St. Paul's offertory, the Legacy of Faith capital campaign to build a new St. Paul's church, and the Bishop's Appeal of the diocese. All of the gifts are processed through the Catholic Foundation, Diocese of St. Augustine, which the Peakses called after hearing about the IRA rollover from a cousin.

"I talked to the diocese and they explained what I needed to do with my investment company and then sent me the paperwork within five minutes," Louise relates. "I talked to my tax advisor and then spent maybe 30 minutes setting it up with the investment company. Now I can make a donation to any recognized charity and it comes off the top of my taxable income. The church gets the same amount of money, and we pay less tax."

Louise grew up in the St. Paul parish, then married Bill and moved to Jacksonville; they returned to Jacksonville Beach 24 years ago. Louise is retired after a long career as a public school teacher and administrator; Bill is retired from a career with Blue Cross. They have been married for 55 years; they had four children and now have ten grandchildren.

"I went to school at St. Paul from first through sixth grade, and I go to church with people I have known all my life," Louise says. "The Catholic church is part of my life-always has been and always will be. I can't imagine not being a part of it.

"My parents helped build the original church at the beach that opened in 1940. The church and the school wouldn't be there if that generation had not helped. They had just lived through the Depression, but they still managed to give.